Parksville/Qualicum home sales increased 49% in February 2016 when compared with February 2015. The average sale price increased 33%. The median house price was $412,000.

In Nanaimo for February 2016 there were 289 active listings of single family freehold homes and 187 in Parksville/Qualicum. 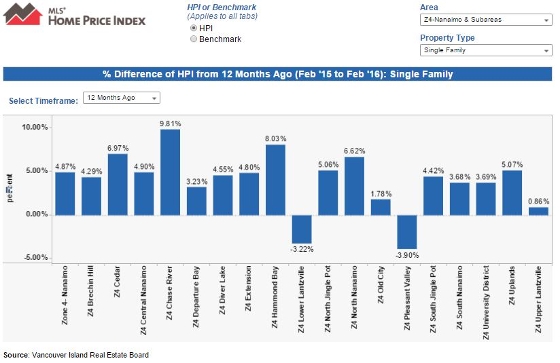 Press release from BCREA – “The Bank of Canada announced this morning that it is maintaining its overnight rate at 0.5 per cent. In the press release accompanying the decision, the Bank noted that inflation is evolving as anticipated but that a weak economy will continue to dampen growth in consumer prices. Overall, the Bank judges that risks in the economy are roughly balanced, though financial vulnerabilities have increased due to falling commodity prices.

With inflation trending close to target while the economy struggles, the Bank of Canada, whose mandate is to target 2 per cent inflation over the medium run, has to strike a fairly delicate balance. Low oil prices continue to vex the Canadian economy spurring job losses in energy producing provinces while also putting downward pressure on the exchange rate, which makes the cost of imported goods from heavy machinery to fresh produce more expensive.  We expect that weak economic growth will continue in the first quarter of 2016, but the possibility of an effective fiscal stimulus, a stronger US economy and a stabilization of oil prices points to stronger growth ahead.  The door remains open for the Bank of Canada to reduce rates once more in 2016, though our expectation is that the Bank will remain on the sidelines throughout the year.”

If you are thinking of listing, or you know anyone who is, please give me a call and I would be more than happy to discuss the current market.

These figures do concentrate on single family homes but if you would like similar information for other property types, such as apartments or patio homes, or specific geographical areas of Nanaimo or Parksville/Qualicum, then I would be more than happy to discuss those with you as well.

As always I hope you find these monthly newsletters informative and if at any time you or any of your friends, relatives or co-workers are looking for a professional realtor to help them buy or sell a home, or just have a real estate question, please call my personal cell, 250-739-1228, or drop me an email.